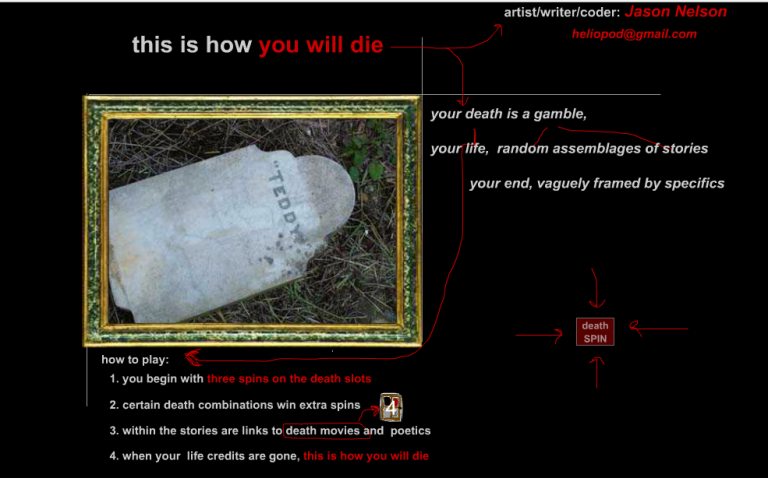 “The concept of death as a familiar and anonymous event was replaced by the suppression of death.”

Dark comedy is risky business–making light of subjects such as death, murder, suffering, etc. still controversial and oft times incendiary when done on stage, let alone when done through the screen. But, Jason Nelson seems to have made it his business not to shy away from provoking his audience–both to laughter and to discomfort. In Nelson’s This is How You Will Die (2005), an early hybrid of digital poetry and–to an extent–generative fiction, readers not only explore death and the macabre as poetic thematic but also experience their own deaths as if a punchline to some kind of joke just beyond grasp. Nelson’s piece owes much of its power and whimsy–can’t forget that whimsy–decidedly to its slot-machine interface which serves to communicate, among other things, a sense of chance (i.e luckiness vs. unluckiness), a sense of the unknown, and an overall sense of play (i.e winning vs. losing). Despite entering a space filled with rather mature and morbid themes, readers feel as if they are playing a game because the presentation of those darker themes is in an unassuming context. Even when paired with the grungy, scrawled aesthetic Nelson has going for this piece (and most of his pieces), there is nothing overtly scarring about reader-interaction with the content. Which, I myself attribute heavily to this piece’s slot-machine interface, yes, but also to its, uhm, nonsense–something I consider to be influenced by a brand of Neo-Dadaism with a hearty sprinkling of nihilism thrown in for good measure.

From “beginning” to “end”, readers of This is How You Will Die are thrust into a space devoid of much understanding beyond the fact that there is a game of sorts that must be played in order for any kind of meaning whatsoever to be gleaned. Upon first entering the space, readers are greeted by a discordant humming and by the slot-machine interface which is housed within a pair of picture frames–that switch back and forth throughout interaction with the piece. The slot-machine itself begins blank (white) except for three clickable choices. All of them are located towards the bottom of the slot-machine–two on the left and one on the right. There are some red, grey, and yellow scribblies that colour some of the white space and extend beyond the frames but none of them are clickable. So, that leaves the three options. Choosing the “Explain Death” on the far left causes a screen to roll down from the top of the frames. Its content is quite interesting, to say the least. If there were an overall point to this piece, it would have to be what is explained/posed here–that life’s a gamble. An ultimately meaningless gamble but a gamble nonetheless. The nihilism is very strong in this excerpt. In clear reference to this piece, it is explained that, “These are words, motions, and doorways, and your last is your death.” So, have fun. The instructions leave little to be desired but they serve their purpose. Moving the mouse over the other clickable option on the left, “Demise Credits”, reveals that a player needs to retain at least ten credits in order to continue “forecasting [their] death.”  Twenty-eight credits are always available (allowing for at least three spins since each spin costs nine credits). And, that leaves one last clickable option on the right–“Death Spin.” Clicking on that gets everything rolling. And, by everything I mean five things. According to the description of this piece provided by Nelson, there are 15 five-line poeticals a reader can come across in a variety of combinations.

It is interesting to note how many cyclical/circular references there are within this piece. There is the slot-machine itself. Then, there’s each slot on the machine. The loop of humming in the background. And, there are these “door” options that will accompany some of the poeticals. Doors numbered 1-9, when clicked, will each play a loop of a short video, a soundbite, and a text. On and on it will go until the reader clicks for another spin and resets the slot-machine. All of these cyclical elements seem to reinforce the nihilistic sentiment in that “Explain Death” blurb–that life is a meaningless gamble because all life is, well, is endless repetition. “Continue styling your hair, adjusting your clothes, lifting, placing, washing, breaking, mending.” the blurb says. None of these things separate you from the herd nor single you out as remarkably purposeful. And, so, what really is the purpose of all of these loops in this piece if not to echo that purposelessness of life itself? Even the words in the poeticals will soon be nothing but repetitive. All possible permutations will wear themselves out eventually and nothing new will be generated (which is why this piece is generative fiction only to a certain extent). All the content behind those additional doors will eventually be exhausted. This piece will wear itself out as it operates, in essence, around a loop. That is its coding–to generate loops… Until the demise credits run out, of course. Then, it’s game over.

But, the screen doesn’t fade to black or anything. Nothing flashes or scribbles out. No, that would conflict with the philosophy being forwarded here. Instead, all a reader is left with once they run out of demise credits is their “death”–a piece of work that puts MadLibs to shame. Perhaps, an additional video as well–also, pretty trippy. Very nonsensical and disjointed. To me, both the lexical and the audio-visual content read distinctively Dada-influenced/inspired. For those unfamiliar, Dada was an early twentieth-century (anti)art movement that, in many ways, acted as a response to the fragmentation of Europe during and especially after WWI. It was a way for artists, writers, and the like to understand how countries like England, France, Italy, and Germany–generally considered the pinnacles of Western culture–could have spent so many brutal and bloody years fighting over, really, fifty-feet of mud. Dada is characterized by nonsense and absurdity because what created it was nonsense and absurdity. It eventually got shoved to the peripheral by Surrealism and then Abstract-Expressionism…  But, a kind of Neo-Dadaism has been popping up lately in contemporary spheres. There is a growing appreciation for art and for expression that is free-associative–which, I think certainly describes Nelson’s piece.

The poems one gets out of his piece here are largely nonsensical. Rarely, do the five parts of each poetical provide any coherence, any kind of traditional trajectory. While this piece is certainly literary–at least, as literary as something akin to Joyce’s Finnegan’s Wake could be considered–identifying how exactly it is literary poses some unique challenges (many that mirror the ones Dada had and still has with fitting into the art world). What is considered a part of the story here? Just the fragments that fill the slots when they are spun? What about the doors and the additional material they provide? Are they a part of the main story? Sub-plots? Should the doors used to access this information be identified as chapters or, maybe, page-breaks? Because, the content “behind” the doors is not clearly delineated. It overlaps the slot-machine interface –little frames house videos with embedded text while audio plays, discordant humming uninterrupted by the additional audio. And, none of the additional audio seems to connect. Some is interview-like while other is list-like. Usually, the images in the videos correlate to the audio but some of the inlaid text doesn’t necessarily connect so clearly. So, are these nine doors portals to separate vignettes? Is each poem its own vignette? Its own story? Nelson describes the interface as working from 15 five-line poems but does that mean that readers should view this work as only having 15 five-line poems and discard the new permutations? I would think not. Especially if Nelson is trying to evoke Neo-Dadaism in some way, viewing this work as being so structured defeats the purpose of it–which, as previously stated, seems to be a celebration of purposelessness and meaninglessness. It is all very paradoxical (loops within loops).

Looking for meaning in why there are nine doors also seems to veer away from the message. At first, I thought they might be related to the Seven Deadly Sins or to Dante’s nine circles of Hell but, unless I’m missing something very obvious, there seems to be no correlation to either of those things. I’d have to force the content to mean what I want it to mean. Though. I am rather fond of the idea of the doors relating to the idiom, “a cat has nine lives.” It seems to fit with the spirit of the piece (i.e the role of chance, luckiness vs. unluckiness). Also, extra demise credits will be awarded on random spins–usually at the cost of something awful like “blood disease” or “electrocution by a lover”–which seems to further invoke this idea of “the luck of the draw.” There is no rhyme or reason to why a bus didn’t hit you today or for why you didn’t develop a cancer in your life other than it being your “lucky day.” And, when you run out of demise credits so too have you run out of luck. Used up your ninth life.

Overall, This is How You Will Die operates on multiple heuristic and stylistic levels to create a new kind of literary experience. While the interactivity is quite minimal in comparison to more contemporary works of E-literature, here the simplicity of it serves its purpose to transform the reader into the author of their own demise. Which, is quite the joke, isn’t it?

Here‘s an interesting paper that talks about this piece (that I couldn’t really find a way to incorporate into my own analysis).

This site uses Akismet to reduce spam. Learn how your comment data is processed.

Help Me Speak Your Language

This work is licensed under a Creative Commons Attribution-NonCommercial-ShareAlike 4.0 International License.

Cue “Eye of the Tiger”

My Tweets
Improving the Model Making Process in Metalworks

Masking #Suffering Over My MA Thesis Topic with #Humor

"That you are here—that life exists and identity, That the powerful play goes on, and you may contribute a verse." ~Walt Whitman

The City of Names
Alchemist Anonymous

A Journey into Digital Alchemy

ALCHETHEORY ARCHIVES
Owls Are People Too

...and this one hoots too much.